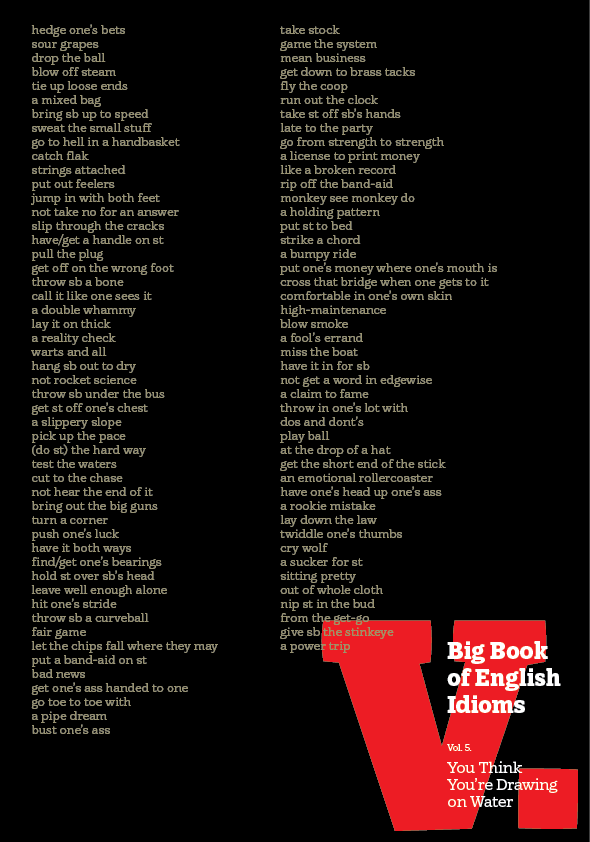 Oh, for God’s sake, get to the point already.


There, see, was that so hard? Ok, let’s see. An idiom is a really cool way of expressing an idea that you could probably express in a bunch of other ways too, except none of those would make the reader/listener go, “Ooooh, that’s some fine English right there.”


I’m afraid it does. A sea of randomly ordered word-clouds defiantly flying in the face of basic English grammar is not an idiom’s natural habitat.


Oh, absolutely. But boy, how awesome does it feel to just drop one in the middle of a conversation? Very awesome, am I right? Particularly if what you’ve just said makes the slightest amount of sense.


In theory there is, I guess. But no one appears to have gotten there and lived to tell about it. In fact, no one’s even come close. Not even me. And rest assured, it wasn’t for lack of trying.


Oh, you will, sooner or later. That’s why it helps to know what each idiom means and how it’s used. HENCE THIS F***ING BOOK.


It is not. Which is why there are seven. There’s the main one, then there are the three short ones right underneath, and three more in the Overflow section.


It is. If eight examples doesn’t do it for you, I don’t think a ninth would make much of a dent.


Mostly, they describe something very similar. I kind of figured you might benefit from seeing them right next to each other, rubbing shoulders so to speak.


Some of them have the exact opposite meaning.


And some look or sound very similar, but mean something completely different.


I’m sure you’ll manage. Don’t sell yourself short. Look at it this way—if you couldn’t tell the difference, you probably have no business learning idioms in the first place.


My point is, I have faith in you. If you were the please-mommy-spoonfeed-me type, you probably wouldn’t be here in the first place.


You read. You think about what you read. You try to remember things. It’s a concept that has been tried before, and often works.


Oh come on, lighten up. I’ll make it as easy for you as I can, I promise. The examples I picked are meant to make you think (or smile, or cringe, or wince, or touch a nerve). They’ll stick with you. They’re not of the “my friend lives in Birmingham it is a rather interesting city and she quite likes it” variety.


One, it needs to tell a complete story that somehow fits within a very small space. Two, it needs to be illuminating in terms of how the idiom in question can be used. Three, it obviously helps if it’s chock full of other grammar goodies as well. Four, it should be memorable and preferably different from all the other examples.


I dare you to come up with five example that check all those boxes. And I mean ALL of them. Kind of tricky, isn’t it? Now, bring me ten thousand of them.


Sorry. It’s just that I get so worked up when the subject of good English comes up.


Yep. Quibble at your own peril.


Never mind. You ever had that experience where you hear someone speak English that’s as rich and beautiful as the day is long and your heart kind of skips a beat and you go, “Goddamnit, I wish my English was more like that person’s.” If you don’t feel that way while reading this book, then one of us has failed, and it’s not me.


It’s the flow. It’s how the words are ordered. How the sentences are strung together. It’s also all the words that aren’t there—words that non-native speakers cram in because they just can’t help themselves—all the some’s, the special’s, the situation’s, the in-my-opinion’s.
Mainly, it’s the feel, though. You know what I mean. It’s just not something that Jindra from marketing would ever produce, try as he might. It’s just... effortless. And natural. And precise at the same time. Un-Jindra-like, if you will.


Ask me if everything in this book is worth learning.


Yes, everything in this book is worth paying an enormous amount of attention to. You won’t be doing yourself any favors disregarding the non-idiomy parts of this book.


No, you would not. I taught you well, my child.


Be warned, though—some of the best stuff in here flies under the radar. It doesn’t hit you over the head. It doesn’t come begging for your attention. You kind of have to look for it.


You go through each example with a fine-toothed comb, taking in one bit at a time and always asking yourself: Is this something I’m actually capable of using if left to my own devices? And then you don’t lie to yourself.


No, dummy. Then you pinpoint the things you’d really like to learn—phrases you’d never think to use in a million years and grammar rules you’ve always struggled with. Then you realize that the whole book is nothing but that.
Then you figure, Hey that’s actually a good thing—all I have to do is memorize the entire paragraph, and I will have learned a busload of stuff in one fell swoop. And then you wonder, what the hell is ‘one fell swoop’ and what possessed me to use it? And then you go google it.
And while you’re googling, you get distracted by a video of a sheep getting stuck in a ditch in rural Italy, and you forget everything you have just read. And that, in a nutshell, is how you learn.